In 2015 Swimming NSW were concerned about the diminishing number of technical officials in their sport. Now only two years later they are successfully turning the tide and encouraging a new wave of volunteers to get involved.

This has been a fantastic result for Swimming NSW

Swimming NSW has 31,000 athletes in 300 clubs spread over 800,000 square kms, administered through 12 Area organisations. Their core competition program relies on a small band of technical officials, many of whom are retirees and hobbyists.

Whilst it had long been recognised that recruitment, succession planning and knowledge management were major challenges, the problem wasn’t large enough to warrant attention.

Two years ago it became clear that unless something changed, it was going to become increasingly difficult to run their competitions.

The CEO and newly invigorated technical committee committed themselves to leading the response. A detailed consultation process identified that many potential volunteers did not have the time to attend formal training.

A plan was established to reduce barriers to participation. The suite of actions included the launch of a new online training portal. 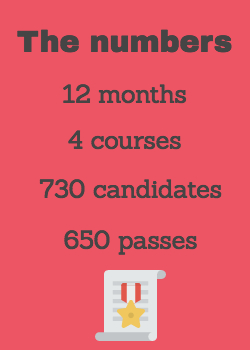 Most of the seeds of the solution were already in place. Swimming rules and operational procedures already existed. The challenge was to re-format and re-present them in an engaging way using modern digital technology to target a willing yet time poor audience.

Whilst many online training platforms are available, a heavy amount of customisation was required to create a user experience focussed on volunteers rather than employees. The need to manage assessment documentation and effectively integrate with the geographically dispersed network of administrators also presented unique challenges.

Since its launch 12 months ago, Swimming NSW now has 4 courses online with over 730 unique candidates registered, with 650 course completions. That’s an average success rate of over 50 passes per month.

Mark Heathcote, CEO, commented, “This has been a fantastic result for Swimming NSW and has assisted many volunteers to get involved in our sport, who otherwise wouldn’t have without these Online Training Courses”.

Mensard is proud of its involvement in this project.

Here is the recording of our 40 min webinar held on Friday 10th March 2017. Contents include: