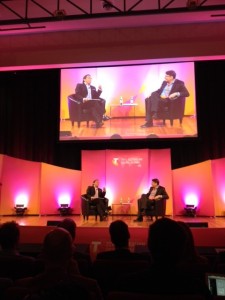 He walked into the American Airlines lounge at JFK airport in New York and showed the receptionist something on his phone. With a smile and a greeting he was welcomed. Nothing amazing about that eh?

This wasn’t some sort of online ticketing app. Our traveller was demonstrating his level of social media influence to gain access to the lounge. Klout is a service which looks at the way that individuals use social media, and calculates an influence score for them on a scale of 0 – 100. Your correspondent has a score of 12 which is way below the level required for lounge access! Brands know that the most powerful promotion is via word of mouth, and hence are targeting people with high ‘Klout’ scores. Similarly stars and personalities are working hard to increase their score so that they can attract more lucrative sponsorship deals.

Joe Fernandez, Co-founder and CEO of Klout was one of a stellar panel of speakers at the Telstra Digital Summit in Sydney today. Was this a line-up of nutters with zany stupid ideas, or an energising yet entirely sober glimpse into the future? Neither, we are talking about the reality of today. Wake up corporate Australia!

The statistics give an idea of scale: 67% of customer journeys start online, PayPal have 5.7m active accounts in Australia – that’s equivalent to around one quarter of the population. Twitter has 200 million users who send over 400 million tweets daily, around 2/3rds of which are from mobile devices. The average person unlocks their phone 110 times per day. And believe it or not Microsoft Word is 31 years old this year.

David Thodey, Telstra CEO, demonstrated both his enormous excitement for the potential of digital, and a lack of clear insights about how his corporate monolith of 40,0000 staff was going to succeed in its ambition to seize the opportunity. That said, he has a smart team who will succeed if anyone can – his Digital ED Gerd Schenkel demonstrated enormous wisdom in several of his comment including that “we recognise we destroy what we buy”. A panel discussion chewed over the challenge of ‘reinventing the core, without betting the company’. No magic solutions were presented, although there was agreement that:

Brian Solis, internationally acclaimed author, digital anthropologist and futurist, challenged the audience to find the courage to lead true transformation. “Today we are all very busy, yet in reality we have the same amount of time available to us as Leonardo Da Vinci had”. Maybe his most impactful moment was an image of a TV remote control to demonstrate the lack of innovation in that industry sector. “We’re going to have to empower ourselves”. Well said Brian.

Troy Malone from Evernote delivered an impressively honest critique of their work to “discover who we really are”. Whilst their purpose to “reduce the amount of ambient stupidity in the world” is not likely to win marketing awards, their ability to create explosive growth driven by word of mouth without a social networking dimension to their product is impressive.

Jeff Clementz from PayPal demonstrated cultural and demographic differences in the audience with their ‘Venmo’ service which allows you to share your money repayment history within your social circle.

Carl Hartmann from Temando explained that the logistics side of ecommerce has a long way to go in Australia compared with overseas. Karen Stocks from Twitter shared some very interesting insights from the Boardroom of traditional corporations trying to grapple with the concept of twitter. “We try to make that ambassador successful”.

A significant conclusion from the day was that Australian consumers are, compared with the rest of the world, very digitally savvy and heavy adopters of the technology. Corporate Australia, however, is not.

How much Klout does your company have in this digital revolution?

The future isn’t what it used to be.